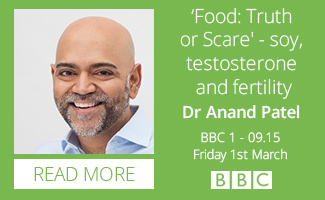 The series Food: Truth or Scare aims to find the truth behind conflicting claims and confusing messages about what we eat. One of the topics covered in this episode is soy, an ingredient that is in more than two-thirds of processed food. There have been a number of news stories suggesting that there might be potential harms to male health and wellbeing from eating too much soy.

As one of the UK’s leading men’s hormonal health clinics, we were approached by the BBC to provide an expert view on this topic. The team talked to one of our doctors, Dr Anand Patel, about the truth about soy, the pros and cons of eating it and, in particular, its impact on men’s hormones and fertility.

Soy contains a number of chemicals called isoflavones. Isoflavones have a similar effect to the predominantly female hormone oestrogen. For this reason, some have worried that eating soy could have a feminising effect on the male body like having too much oestrogen.

Articles in the Daily Mail and The Guardian have warned about impaired fertility and falling sperm counts in men with high soy intake. These were based off a study by Dr Jeorge Chivarro and colleagues. In this study, a group of men were given a semen analysis and a questionnaire of their dietary habits. Men with higher soy intake were more likely to have a lower sperm count that those who did not eat soy.

The paper led to some controversy. The implication was that soy was damaging for male fertility, but there were significant flaws in the design of the study. The type of study meant that only a loose association between soy and sperm count could be made, an unreliable questionnaire was used for tracking diets into patient pasts, and the majority of the patients were overweight or obese.

In the programme, the Centre for Men’s Health’s own Dr Patel explains that:

So ultimately, no. As the more recent study from Dr Hamilton-Reeves and colleagues put it “no significant effects of soy protein or isoflavone intake on [male hormones] were detected regardless of statistical model”.

Registered Nutritional Therapist Monica Durigon acted as consultant to the Centre and the BBC on the programme and is an expert in this field. She explained that soy is used as a filler in processed foods and it is processed foods that are the issue and that it is difficult to overstate the effects of a poor diet and lifestyle on male health.

Diets high in processed foods and carbohydrates are especially prone to causing blood sugar imbalances and can even lead to diabetes and obesity if left unchecked.

This is important, because fat cells carry out a process called aromatase conversion. In this process they convert testosterone into estradiol (another form of estrogen). The effect is double edged for men, as not only can high levels of estradiol be detrimental to their health, but they are losing their own supply of testosterone in the process. Higher fat content in the body means that more testosterone is converted to estradiol. Higher insulin levels from carbohydrates causes fat cells to work even harder in the aromatase conversion. This is part of the reason why obesity and diabetes is such a dangerous combination.

On top of all of this, lack of sleep and exercise, and excess stress can all add additional strain to male hormonal health.

Soy is not bad for you, poor diet and lifestyle are

Soy is an extremely versatile plant. It is 40% protein and a good source of calcium, iron, and essential fatty-acids. While it does contain compounds that can interact with oestrogen receptors, the evidence that these are damaging to male health are weak.

Processed foods often use soy products as filler and this is where much of the danger lies. These foods can lead to health problems and hormonal disturbances in men.

Luckily, a healthy diet can absolutely include soy. Combined with lifestyle decisions like regular exercise and enough sleep, most men can remain in excellent hormonal health.

To watch the full BBC show, click the link below

For those interested in learning more, or in getting personalised advice from a men’s health doctor you can always contact the Centre for Men’s Health.